Where To Ski or Snowboard In May 2018 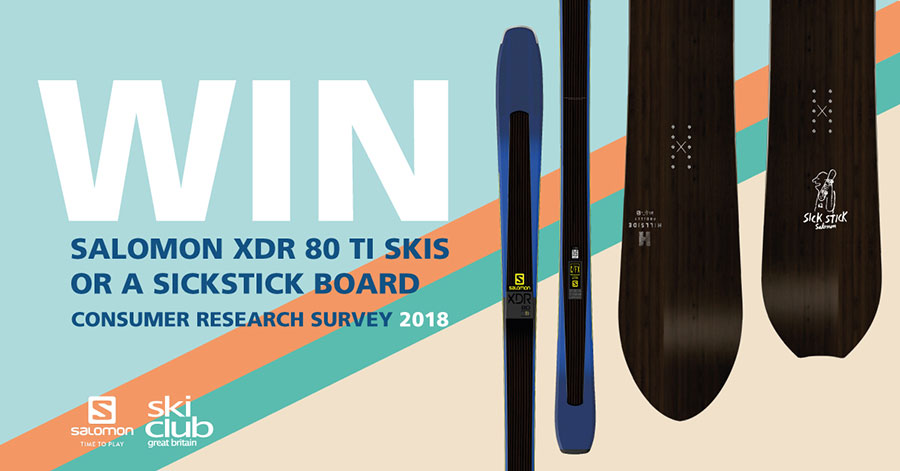 Click to find out how to WIN Salomon Skis or a Snowboard (just by answering a few questions)...

Here's the first of our monthly guides to help you find the snow during the northern summer and southern hemisphere's 2018 winter .

This Month's Snow Headlines
- Heavy late April snow in many ski regions leave excellent conditions for the start of May.
- Summer only areas begin opening in Scandinavia, USA and Japan.
- Snow still lying up to 6.9m (23 feet) deep in the Alps.
- USA has 16 ski areas open at start of May, almost double the total of 9 in 2017.
- Good pre-season snow falls reported in New Zealand.

The start of May 2018 is looking decidedly snowy compared to this time most seasons. Fresh snow has been falling on still-open high slopes in the Alps in the final days of April and more is expected up high at the start of May too. That comes after one of the snowiest winters on record at some western areas, meaning bases are far deeper on the continent's glaciers than they were last summer - hopefully enough to withstand the thaw this year.

There's been some fresh snow in North America also and around 20 areas are open here as May begins, including an unusually high number on the eastern side of the continent after a cold and sometimes snowy April.

That said, around 80 ski areas are open at the start of the month, and a few glacier areas actually open for their summer ski season in May, but by the end of the month the overall numbers open will drop to around 15.

Then they'll start to climb again in June as southern hemisphere resorts open and more glacier ski areas re-open in the Alps.

More snow is in the forecast for many of the high altitude ski areas still open, but with very few open resorts now it's important to check local conditions and resort opening times directly before travelling!

EUROPEAN ALPS
Austria
The snow is lying up to 5 metres deep on Austrian glaciers with the Dachstein, one of the country's two glaciers that endeavour to stay open year round (the other being Hintertux) reporting the deepest cover. Also open through May are the Stubai and Kitzsteinhorn glaciers, both reporting great conditions and expecting to stay open to June and July respectively.

Of the Austria's other four glacier ski areas Solden closed on the last Sunday of April, Pitztal will close May 6th, Molltal on the 13th and Kaunertal will close on the 21st.

France
In the French Alps only two ski areas are scheduled to be open after May 1st – Tignes to the 6th and Val Thorens to the 8th. After that there'll be nowhere open in France until Val d'Isere re-opens for summer skiing in June, followed by les 2 Alpes and Tignes.

Val d'Isere has made big news of the fact it will open on 2nd June, a few weeks earlier than usual, initially expecting to use winter slopes without glacier cover for morning summer skiing until mid-June. It's the first time the resort has ever done that in its 82 year history and it says its down to all the snow received this winter.

Switzerland
Engelberg is posting the world's deepest snow at 6.9 metres as we enter Mayand will stay open through May; as will Zermatt, which offers year round skiing. Glacier 3000 and the Diavolezza glacier near St Moritz are also staying open just in to May.

Scotland
Scottish skiing has made it in to May this year with Glencoe planning to stay open to May 7th.

Scandinavia
In Scandinavia there are about 30 areas open, most in Norway, some reporting up to 15cm of fresh snow in the final days of April. Many will close May 1st, some like Ruka in Finland, open since early October thanks to snow farming, on the 6th.

However the Folgefonn ("Fonna") glacier in Norway only opened at the end of April with a 4m base and 15cm of fresh snow so it is open all summer. It will be joined by the Galdhoppigen glacier area on May 20th and finally the Stryn glacier on June 1st.

Also open throughout May is 'Europe's Spring skiing Capital' Riksgransen up in the Swedish Arctic Circle where skiing/boarding under the midnight sun is offered several times a week from mid-May.

Unusually there are almost as many ski areas open in the East of the US as the West after a cold and often snowy April, at least until the last week, in the region.

Closed midweek but open next weekend for the last time in the 2017-18 season are Sugarloaf and Jay Peak in Vermont, Wildcat Mountain in New Hampshire, Sugarloaf in Maine and Mont Sutton in Quebec.

Killington will stay open "as long as the snow lasts" – daily until the 13th then weekends for the rest of May.

There's been some good April snow too in the West and the usual suspects have announced they'll be staying open later in to May and in some cases right through to June and potentially July.

In California Mammoth and Squaw Valley have been said they'll be open until May 28th, but they often extend their seasons beyond that. In Colorado Arapahoe Basin has given June 3rd as the end-of-season date so far but again further extensions are not unusual. Two other Colorado areas, Loveland and Winter Park are open to May 6th.

Snowbird in Utah says it will continue a further week top May 13th whilst in Oregon Mt Hood Meadows says it will stay open to the 18th, Mt Bachelor to the 27th and Timberline is open year-round.

Finally the summer-ski-only area of Beartooth Basin (formerly: The Red Lodge International Ski and Snowboard Camp) on the Montana/Oregon border will open for its summer season on May 26th.

North of the border the usual four ski areas have made it in to May, along with, more unusually, the previously mentioned Mont Sutton in the East. Marmot Basin and Lake Louise in Alberta will be open to the first weekend of the month, then Sunshine at Banff and Whistler Blackcomb will continue another fortnight to the 22nd May.

Asia
As with Scandinavia, a few dozen Japanese ski areas stay open in to the start of May but most close on May 1st or Sunday May 6th.

The big exception is the ski area near Gassan which, like Norway's glacier areas, is so snowy in mid-winter it isn't actually dug out with its access roads cleared until April, then stays open to July. This year it tried to open in mid-April but had to close due to lift problems but then finally opened on the last Saturday of April for its 2018 season.

Southern Hemisphere
Snowmaking, with 'all-weather snowmaking machines' has been reported underway in Australia whilst some ski areas in New Zealand got up to 50cm of fresh snow over the last weekend of April, but the 2018 ski season isn't due to kick off properly until the second weekend in June unless there are early openings.
The Admin Man

There is snow forecast to fall in France over the next week, in at least 50 Ski Resorts including Alpe d'Huez, Chamonix, La Plagne, Tignes and Val d'Isère.