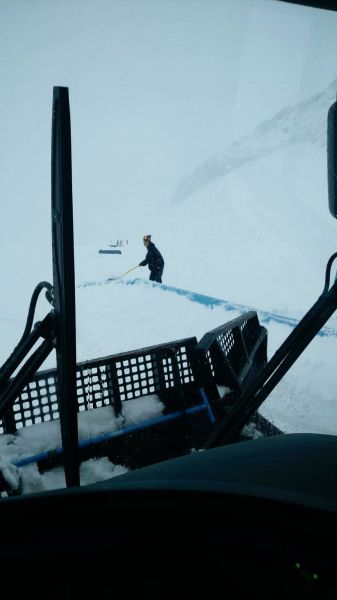 The Hintertux glacier has reported another 15cm (6 inches) of snowfall in the past 24 hours after several snowfalls in August.

Hintertux is currently the only ski area open in the Austrian alps but it's due to be joined by half a dozen Austrian glacier areas planning to open over the next four weeks, the first three the weekend after next.

The Pitztal and Solden ski areas will open for their eight month 2020-21 season a week on Saturday, September 19th, the first time they will have operated in just over six months, since the country's pandemic lockdown began in March. The Molltal glacier is also scheduled to re-open that day, it had already been open from June to mid-August.

Six days later the Stubai Glacier will re-open on Friday 25th, another that has not been open since March, and due to stay open for nearer 10 months to late spring/early summer, 2021, all being well.

The Kaunertal Glacier, which opened for just over a week only in spring when allowed to do so, re-opens for its equally long season the next day, Saturday 26th.

Two more Austrian glacier areas, the Dachstein near Schladming and the Kitzsteinhorn above Kaprun are expected to open the first Saturday of October, on the 3rd taking the number of areas open in the country to eight – likely to be around half the total open in the northern hemisphere at that point. The Dachstein is already open for cross-country skiers.

Many of the resorts plan toned-down 'opening weekend' events with new-season gear testing to celebrate and launch the new season.

Kitzbühel plans to open three weeks later on the 24th using snow saved from the previous winter to build a few runs.

Austrian ski areas have been announcing in recent days and weeks that they'll operate without social distancing in lifts, which will be regularly deep cleaned through the ski day. Skiers will have to wear masks in them and in queues.

The only other areas open in the alps at present are Saas Fee and Zermat in Switzerland (the latter's glacier ski area also accessible from Cervinia for much of Sepember), and Passo Stelvio in Italy. A second Italian area, Val Senales, normally opens for its season in September too.

Otherwise glacier areas at Tignes, Engelberg and the Diavolezza Glacier near St Moritz will be opening in early October.