Battle for Control of Park City Resort Has Wider Implications

Battle for Control of Park City Resort Has Wider Implications 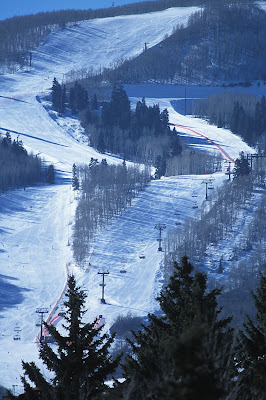 The battle to offer the largest ski area in the USA and possibly North America is likely to take a few steps forward during April as two of the largest ski companies in the US do battle in the courts over the future of Park City Mountain Resort (PCMR), pictured above, one of three ski areas next to Park City and the only one with a base right in the famous ski town.

The legal battle centres on PCMR's failure to properly renew its lease, which it has held for more than 50 years, on the land its ski slopes are located on.

These are owned by a company called Talisker, which also owns the neighbouring Park City resort of Canyons, but last year decided to lease Canyons and pass on the legal action to Vail Resorts, operators of 10 US ski areas.

Upon taking control of Canyons Vail Resorts almost immediately issued PCMR, which is run by another large US multi-ski-resort-owning group, Powdr, with an eviction order.

The court case coming up in April is essentially about whether Vail get their way and PCMR has to leave.

Previously PCMR's operators have said they weren't sure why Vail wanted to evict them from the land, as PCMR separately own the resort base area, but Vail last week clarified their position and said they would offer to buy the base. It is believed they could also access the slopes of PCMR from Canyons.

The potential significance of Vail Resorts gaining control of PCMR would be that when combined with Canyons, the two combined would have around 7,300 acres, making it by far the largest ski area in the USA and only a few hundred acres smaller than North America's largest area Whistler Blackcomb.

Vail was formerly the largest ski area in the USA but this season Big Sky resort in Montana began claiming that it had "the biggest skiing in America" after its acquisition of a neighbouring, bankrupt ski area gave it 5,750 acres, more than 500 acres more than Vail.
www  The Snow Hunter