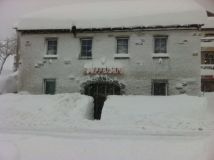 Snow Report Summary
This Week's Headlines:
* Fresh snow in the Alps, Pyrenees and Dolomites in recent days and still continuing.
* 50cm of new snow at Bardonnechia reported on Christmas Day.
* All five Scottish areas aiming to open Boxing Day.
* Andermatt claims deepest base in world, first past 3m for 13-14, with 350cm

As we head towards 2014 there's mixed news. In most of the world's leading ski areas, big November snowfalls have set up most leading resorts for the ski season. The less good news is that most have not had much fresh snow since the last week of November - with the result that pistes are generally in good shape, but off-piste fairly non-existent for freeriders.

That situation has improved for many however, particularly in the southern half of Europe. Over the past 48 hours, a band of heavy snowfall from the Pyrenees to the Dolomites (including the Southern Alps) brought Christmas snowfalls of up to 50cm in 24 hours to some resorts. But the new snow is not universal and some areas could still do with much more.

The past week has seen improvements however with quite a few areas in the Western Alps reporting powder days over the weekend. There's also been heavy snow in Scotland as part of the current cycle of storms in Britain and the biggest powder falls reported in both Eastern and Western North America.

The fresh snow has fallen, in many areas, on a very unstable base (thanks to the largely snow-free December, and recent strong winds) and there will be a very high risk of potentially large avalanches for at least the next week.

If you're looking to leave the pistes at all; take local advice before doing so, check the avalanche bulletin in resort and take extra care on all slopes. Wear a transceiver, carry a shovel and a probe, and do not ski alone - hire a guide if you do not know the resort.

Europe
Austria
Snow has been reported on higher slopes across Austria over the past 48 hours with Solden the stand out resort claiming 60cm (two feet) of fresh snow in the last 48 hours on its glaciers. Neighbour Obergurgl was another of the big winners, they say, with 24 cm.

Elsewhere the picture is less impressive with just the odd centimetre here or there and the freshen up still badly needed at resorts where freeriding is the main attraction, such as St Anton. The deepest snowbase in Austria has dropped below 2m, with Pitztal at 199cm.

France
There have been some big snowfalls in the southern French Alps in recent days. Auron said a foot (30cm) fell in the 24 hours from Christmas Eve to Christmas Day and Isola 2000 reported even more, 45cm/18 inches. Throughput the rest of the country snowfalls have been less significant, but still much needed with around 20cm of new cover reported by resorts in the 3 Valleys, Grand Massif (Flaine, Morrillon) and at Les 2alpes, which has the country's deepest snow base of 1.8m on its glacier. La Clusaz reports 15cm (six inches) of snow in the last 24 hours.

Italy
Italy has seen some of the best snowfalls of the past few days. Bardonecchia in the country's North West posted a 50cm snowfall up to Christmas day and the MonteRosa region reported 25cm. Moving further east Madesimo also reported a foot (30cm) of fresh snow. In the dolomites, where Arabba claims the deepest base at 2.9m the wave of fresh snow is starting to accumulate on the ground with Alta Badia reporting the biggest snowfall to date at 25cm (10 inches) in the last 24 hours.

Switzerland
Leading Swiss resorts have been reporting some big snowfalls in the past few days. Murren has had 25cm of fresh snow in the 4 hours to Boxing Day, neighbours Saas Fee and Zermatt around 50cm each spread across the past 72 hours – so Swiss slopes are looking in very good shape for the start of 2014. Elsewhere Gstaad reports 20cm of new snow and Engelberg 8cm. Andermatt has had 32cm over the past three days, although two thirds of that in the past 24 hours, and has the deepest base in the world at present with nearly 12 feet (3.5) lying. The snowfall is continuing on Boxing Day with Leysin and Grimentz the latest to report 20cm accumulations in the past 24 hours.

Pyrenees
It continues to be an excellent start to the 2013-14 season in the Pyrenees, where resorts got off to an early start after heavy November snowfalls and are still posting some of the deepest bases in the world for non-glacier resorts and receiving fresh snowfall top ups too. Grandvalira, the largest ski area in the region, reported 10cm of new snow on Christmas Day and has a 1.7m base on upper slopes. On the Spanish side Baqueira Beret is fully open for the holidays and on the French side Cauterets said they'd had 20cm of snow on Christmas Eve.

Scandinavia
Scandinavian ski areas got the best of Europe's new snow earlier in the week when resorts like Hovden and Voss in Norway reported 25cm of fresh snow each. Are in Sweden, the region's biggest ski area, opened its three new chairlifts for Christmas (making it bigger still) and was blessed with a few centimetres of fresh cover on Christmas Eve. It, and other resorts in the country, typically have an adequate 50cm of cover. Further north Santa has been a little less generous with the white stuff in his homeland and resorts like Ruka and Levi in Finland have 30-40cm bases although that's enough for most pistes to be open.

Eastern Europe
Not much fresh snow reported in Eastern Europe in recent weeks and snow bases have been dropping a little from the season start. Pamporovo has the best base in Bulgarian at 70cm on upper slopes, most areas have just 30-50cm lying. Hopefully the snow moving across Europe will make it further east.

Scotland
The ongoing cycles of storms and thaws that has plagued the chances of a stable season in Scotland appears to have a weather window on Boxing Day (today) when all fie Scottish ski areas are hoping to open all at the same time for the first time this season. There have been heavy snowfalls but also power problems and drifting due to the gales so the ski areas say they'll need to prep the slopes which may delay opening to mid-morning in some cases, plus with more storms expected the opening in weather dependent at each area. Several have been without power (Cairngorm), seen 100mph+ gales (Glencoe) and several (Glenshee and the Lecht) cut off by snow earlier this week.

North America
Canada
It has been cold (as you'd expect at the start of winter in Canada really) and Mont Sutton in Quebec had to close at the start of the week while they 'de-iced' the lifts. It has also been snowing in the East with Tremblant reporting 20cm at the weekend while Mont Ste Anne got 25cm and now has a very healthy base. On the west there was quite a lot of snowfall at the weekend but that has slowed over the past few days, with Apex, receiving 25cm of new snow for Monday, the last big accumulation reported. Kimberley and nearby Fernie in Eastern BC are reporting the deepest snow in the country at present with 2.3 and 1.8m respectively, both have had a few inches of fresh snow this week too.

USA
It's a mixed picture in the US as in Europe with some resorts on both east and west sides of the country reporting healthy snowfalls in recent days, but also soe complaining of 'unseasonably warm temperatures' melting the snowpack. Typically it's the usually snowy areas that are looking OK however, and the more marginal areas to the south that are facing snow cover challenges. Colorado has reported good snowfalls, particularly over last weekend, with Steamboat seeing to do especially well with over a foot of fresh snow and Copper Mountain getting 20cm. Alta in Utah to the north reported 25cm of new snow on Monday. Big Sky in Montana, the country's largest ski area, also has one of the deepest snowbases in the US at present at 1.5m (five feet) but Eagecrest in Alaska has the deepest of all at 1.93m.
The Admin Man

Believe it or not it is possible to have too much snow. Alpe Devero (1631m) a micro ski area in northern Piemonte got 1.5metres on Thursday.

Looks like there're still trying to dig themselves out!

On the Swiss side, Simplon Dorf was cut off for a day or so due to avalanche danger. Nevertheless they managed to dig a path to the bank!

tHANKS FOR THE EARLY WARNING

They've got til 4 January to sort the excess powder out!
I am NOT complaining about fresh powder

especially as it was first fresh dump there since late November!
More snow predicted today