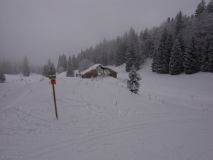 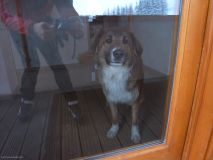 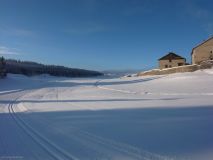 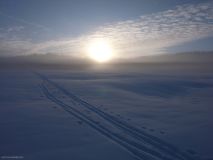 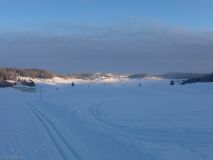 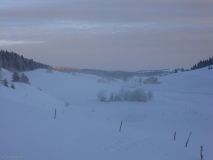 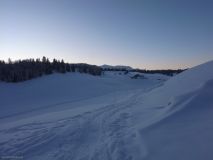 The Jura are a range of mountains separating the Rhine and Rhone rivers along the French-Swiss border. Despite our valley house being just below the Jura in the years we've been here I've never much explored the Jura instead going to the alps. But last summer I was climbing a lot in the Jura with a friend who lives in Annecy as the Jura is handy for both of us and I thought how great the area was for winter touring. It's an obvious idea to make a traverse of the whole length of the mountain chain so I set out this week to cross the Jura on skis. Given the rolling terrain it makes sense to use nordic touring gear, longer skinny skis ideal for covering larger distances on rolling terrain.

So I took a train, bus and taxi journey to Giron in the Ain department of France to start a route called the GTJ or the Grande Traversée du Jura français, my plan is to use this for a day or two before hopping over the border into Switzerland and picking up the Traversée du Jura Suisse (TJS) which is a bit wilder and technically harder. I dropped into the tourist office at Giron for a chat and they rather kindly offered me a ride up the mountain to avoid some poorer snow low down which saved me about an hours skiing I'd think, that was handy as the public transport had taken me to nearly lunch time to get to Giron so I was on a fairly tight schedule.

It's not a great day really in terms of weather so I'm reduced to taking photo's of signs, although I did think the forestry sign was pretty funny.

That's the refuge I used for the first night, extremely basic but it has running hot water and power which is more than we get in the winter in the high alps. The guardian produced some good food and it was comfortable enough, there were only two other people staying so it was pretty quiet.

Leaving at dawn the next morning I got to enjoy a pleasant hour or so skiing in the early morning light, it was pretty cold but I was able to cover a lot of ground fairly quickly which was useful as I was heading for a long day to reach the Swiss border.

Somewhere between these farms a dog appeared and started to follow me, I looped back a few times trying to lose it but each time I thought he'd gone he'd suddenly bound out of the forest wagging his tail and rolling around in the snow. After a couple of km it was pretty clear he was just going to keep following me and since we were in a remote area there wasn't a lot I could do really. After about 5km from where I first saw him I detoured to a small village and asked for some help at the local hotel. Fortunately they were happy to take my new friend and try and find the owner so here he is wondering where his new best friend is going without him :

By now the cloud had rolled in and I was behind schedule so I had to put a sprint on to avoid finishing in the dark and skiing by head torch. But I managed to reach my overnight stop in La Cure on the border just after 1600 after skiing about 38 km.

La Cure is an odd place sitting on the border and the hotel I used was split between France and Switzerland but mostly French I think and they were billing in euros so I think were more French than Swiss. It was actually pretty good, a high level of luxury if you're used to gites and mountain huts so I spent a pleasant night ready for the next morning and the first legs of the Traversée du Jura Suisse

Nice trip Ise,
Were you far from Cret de Neige.We hope to be down by this time next week,and its due to snow for next nine days, the dog looks crestfallen on your departure.
Goff

Le Crêt de la Neige is about 4km from the refuge, apparently measurable tectonic activity has altered the height of it by a couple of meters which is pretty amazing

Ise, did you not consider harnessing the dog and getting a tow?

Seriously, I hope he was returned to his owners, and nice report and pictures as usual.
www

Thanks Ise,
It was very interesting and lovely photos.

Someone walked off with our dog like that, once, when he was young. Our dog followed them down the road to the village and then somehow ended up on his own, but luckily some nice kids found him and their parents phoned me (we have our phone number on his collar). It was very kind of you to leave him somewhere safe because otherwise I expect he'd have followed you the whole way.

I couldn't translate everything on that forestry sign, but it was pretty strange. I got the private forest road bit, but for chantier my dictionary says 'building site, builders yard, mess' so I wasn't too sure what it meant unless it means something like a loggers camp, so strangers to the site are only tolerated at their risk and peril as the road is dangerous and only suitable for limited vehicle sizes.

it's much funnier if you translate "étrangers" as foreigners

the dog didn't have any identity on his collar, he'd got a collar on and I'd assumed it would have a disc, when I got the hotel and we checked it turned out he'd got no id', I'm going to try and chase the hotel up and see that he got home OK.

good news about the dog !!

I just contacted the hotel and they found the owner who came to fetch him. That's a relief, I've been quite worried about him

.
That's the trouble with farms - the dogs tend to left loose outside (like ours) and if they get bored they're likely to follow someone, especially when they're young dogs.

I think maybe in English we'd have 'visitors' on a sign like that. I'm sure I've seen signs in building yards etc. that say something like 'Visitors must report to the site office immediately on arrival'.

It's one of the problems I have when I'm trying to translate French - there are often many possible meanings to a word. I suppose it's the same in English, but I don't notice it because I'm a native English speaker.

That word chantier might come in handy to impress my French teacher at my next lesson if I said something like 'Chez moi, c'est comme un chantier!'. Do you think that sounds okay?

Save on Ski Hire in Giron