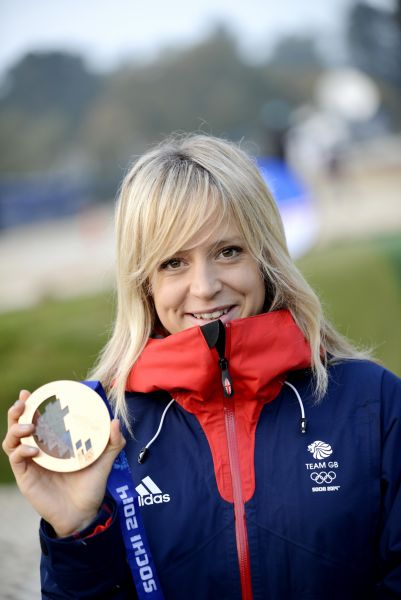 Twenty-five athletes will compete across alpine, cross country, freestyle skiing and snowboard events beating the previous record of 22 selected for Cortina more than 60 years ago in 1956.

Freestyle skiing is the largest of the ski and snowboard disciplines with 11 athletes selected, while six snowboarders will compete in PyeongChang including Zoe Gillings-Brier who is set for her fourth Winter Olympics. Four alpine and four cross-country skiers complete the team.

More than half of the squad (14) will be competing at their first ever Games while Dave Ryding, Andrew Musgrave and Andrew Young join Gillings-Brier as the more experienced athletes with the three skiers selected for their third Olympic Winter Games.

With an average age of just 24, Ski & Snowboard Team Leader Dan Hunt sees PyeongChang as one of the first major steps on a journey which can move Great Britain towards being one of the world's leading snowsports nations.
"When you look analyse this squad, it's a pretty good indicator of where British snowsports will be heading over the next four years to Beijing and then beyond," said Hunt, cointinuing,

"We will be competing in more disciplines in PyeongChang than we have before and we've never had more athletes heading to an Olympics with genuine expectations about how well their performances will stack up against the best in the world. … I am certain that we're going to Korea with opportunities to deliver more world class performances than a British ski and snowboard team ever done.
"

Dave Ryding leads a team of four alpine skiers which will compete across the technical disciplines in PyeongChang. Ryding, returning for his third Games, earned six top 10 World Cup finishes last year including a podium at Kitzbühel, and has backed that up with four more top 10s this season.

"It's definitely a bit different going into these Games compared to the last two," said Ryding. "The first time I went hoping for some good performances, then last time I went in knowing that on my day I could mix it in the top 30.

"This time I'm ranked in the top 15 and that's where the medals usually come from. I've had some good results recently and I can build on that." Commenting on the fact he is entering the Games with more media attention than ever before, Ryding added, "There's a lot more recognition now, which is nice – it means I'm probably in with a chance."


He will be joined in the men's slalom by 21-year-old Laurie Taylor who made his World Cup debut last season and went on to finish 33rd at the World Championships in 2017.

Alex Tilley will compete in the ladies' giant slalom and slalom, while Charlie Guest will join Tilley in the slalom. Tilley has had her best season to date on the World Cup circuit, earning a career-best 13th in Courchevel. Guest's inclusion comes three years after the 24-year-old fractured four vertebrae while training in Sweden.

The quartet will also combine for the Alpine Team Event which is making its Olympic debut.

Andrew Musgrave and Andrew Young return for their third Olympic campaigns and their best chances following strong seasons to date.

Musgrave was fourth in the 50km free at the World Championships last year and has also stood on the World Cup podium earlier this year. Young battled illness at the start of the season but has returned to form with three top 15 World Cup results from his last three races.


Musgrave said: "It's definitely different approaching these Olympics compared to the last couple of times,"
"Vancouver was a learning experience – I was never realistically going to be fighting for a medal. Four years later, Sochi: on a really good day, then maybe a top 10. It's a different set-up now and everyone on the team is faster than they were four years ago. We have new coaches, we're a lot more professional.
"I've been on the [World Cup] podium already this year at the Tour de Ski, I'm healthy now, training is good, so now it should be a realistic goal to be right up there in PyeongChang."


Callum Smith and Annika Taylor round out the quartet of British Nordic Team skiers on the way to PyeongChang. Smith competed in the Sprint, 15km classic and skiathlon in Sochi, while Taylor – a top 30 finisher at the World U23 Championships in 2016 – is the sole member of the ladies' team.

Events which will be raced by each athlete will be confirmed closer to the Games.

Ski slopestyle represents one of Team GB's strongest snowsports disciplines with high hopes in both the men's and ladies' events. James Woods is a four-time World Cup winner in ski slopestyle and finished fifth in Sochi despite a painful hip injury which hampered his performance.

Tyler Harding will make his Olympic debut in the discipline following a breakthrough season on the World Cup circuit which saw him earn his first top 10 in France just before Christmas.

Katie Summerhayes finished seventh in ski slopestyle in Sochi and returns for her second Games as a perennial contender having finished inside the top 10 at seven of her past nine World Cups including second at Stubai in November.

Also competing in the event will be Isabel Atkin who has made quite the name for herself over the past twelve months. In the last year, 19-year-old Atkin has competed at her first X-Games, earned a World Championships bronze medal and stood on the World Cup podium twice, including victory at Silvaplana last March.

Murray Buchan leads a trio of men's halfpipe skiers on their way to PyeongChang. Buchan was a member of Team GB in Sochi where he finished 17th and has been consistently competitive on the international stage for a number of years, earning top 20 results at the last four World Championships.

Earning selection on the back of strong 2017/18 seasons are Peter Speight and Alexander Glavatsky-Yeadon. The pair have been steady improvers over the course of the campaign, highlighted by their maiden World Cup finals appearances in China in December where Speight finished fourth and Glavatsky-Yeadon eighth.

Rowan Cheshire will be looking for Olympic redemption when she lines up for the ladies' halfpipe in Korea. Cheshire was highly-fancied going into Sochi having won a World Cup just a month before, however a crash in training ruled her out of competition.

A cautious return to the top of the sport over the past four years has her primed to finally make her Olympic debut in PyeongChang. She will be joined in the halfpipe by Molly Summerhayes – sister of Katie – who is off to her first Games. The 20-year-old is the 2015 Junior World Champion and broke through for her first career World Cup top 10 in China late last year.

Seventeen-year-old Madi Rowlands had met the requisite eligibility criteria in both slopestyle and halfpipe, however a knee injury earlier this month ruled her out of contention.

Emily Sarsfield will line up in the ladies' ski cross and the 34-year-old, who will be the oldest member of the ski and snowboard squad in PyeongChang, suffered a knee injury which ruled her out of Vancouver 2010 and narrowly missed out on selection in 2014.

Lloyd Wallace continues a family involvement with the Games and in doing so has become the first British male to compete in aerials in 20 years. His mother Jilly (nee Curry) appeared in the 1992 (moguls) and 1994 (aerials) Olympic Winter Games, while his father Robin participated in the demonstration sport of ski ballet in 1988.

Wallace's ticket to the Games looked in danger when he was placed in an induced coma following a training accident in August, however he has made a full recovery and competed regularly on the World Cup circuit this season prior to selection.

Rowan Cheshire said: "I'm super excited to get selected and it definitely takes a weight off your shoulders. I can't wait for the experience and it should be really fun. I've competed in PyeongChang before, it's such a nice vibe and I'm looking forward to seeing how the place has developed since we were last out there. I'm trying to see the Games as any normal competition so I don't get too nervous and can stay calm, but I know how much the Olympics means to me and everyone else."

Aimee Fuller was part of the same competition which brought Jenny Jones her historic bronze medal in Sochi when she finished 17th in the ladies' slopestyle. She has earned four World Cup top five finishes in her last 10 competitions and has two career top 10s in big air.

Twenty-year-old Katie Ormerod will join Fuller and brings with her impressive slopestyle form over the last two years including a bronze in slopestyle at X-Games and four World Cup top fives in slopestyle. However it is in big air where Ormerod could make the biggest impact: in 10 World Cup competitions she has finished in the top 10 nine times and finished on the podium on five occasions including victory in Moscow last January.

Jamie Nicholls and Billy Morgan will become two-time Olympians next month and will compete alongside 20-year-old Rowan Coultas. At Sochi 2014, Nicholls finished seventh and Morgan 10th in slopestyle. Since the last Games, Morgan has stood on the World Cup podium twice amongst six top 10 performances and created history when he became the first snowboarder to land an 1800 quadruple cork.

Nicholls, who carried the Olympic torch in Busan in November, has appeared on the slopestyle World Cup podium three times in the past two years, including victory in the Czech Republic in March 2016. Like Morgan and Nicholls, Coultas has only competed lightly this year but is a star on the rise having earned his first World Cup top 10 as an 18-year-old in 2016, and adding three more to his tally during the 2016/17 season.

Zoë Gillings-Brier will line up in the women's snowboard cross for a fourth straight Games. Having reached the World Cup podium seven times – including a victory in Chile in 2004 – Gillings-Brier, who has become a mother since Sochi 2014, has finished inside the top 10 at her last two Olympics (eighth 2010, ninth 2014).


Billy Morgan said: "I'm stoked. It's been four years since we were last here so it's great for it to all come together again. Seeing all the kit just makes it even better. We've been out in South Korea for a test event and it was pretty epic so I'm really happy to spending a whole Games out there."