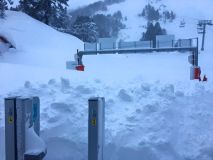 It's been another (very) snowy week in The Alps... and most other places too! 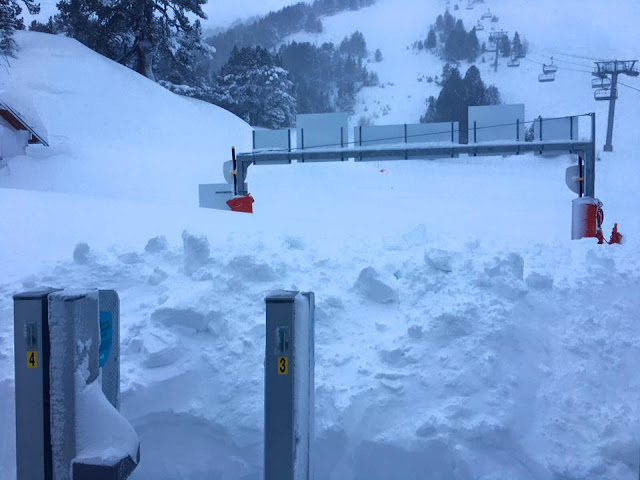 Spare a thought for the pisteurs who had to dig out the chairs at Les Arcs this week...

The snowfall that started a fortnight ago in the Western Alps has, if anything, intensified in the past 72 hours. The totals - at the top of the slopes in some of Europe's highest resorts - have been astronomical, with Chamonix claiming 3m/10 feet of snow has fallen on its upper slopes in the past week alone.

Temperatures have also dropped bringing the snowline, which rose as high as 2000m last weekend, back down to the valley floor and finally turning some of Europe's traditional ski resorts white. Previously whilst ski areas might have several metres up top, there'd been little or no snow at resort level, unless a purpose-built altitude resort or a high elevation traditional village. Other weather factors have also varied a lot, Tignes reported 90mph winds on Wednesday and there have been fog and white out conditions at resorts at times, interspersed with clear blue sky days.

The area covered by serious snowfall has also expanded eastwards with significant snowfall reported across Austria this week as well as in other countries like the Czech and Slovak Republics.

It has been a snowy week in most of the rest of the Northern Hemisphere too. There's been more good snowfall in Scandinavia, Eastern North America has continued its catch-up and in Scotland all five ski areas have opened for the first time this season.

Ski areas in Japan are reporting that, after a slow November/December there too, it has been dumping down since Christmas.

Huge amounts of fresh snow, especially at altitude, means the avalanche danger continues to be very high.
There have been further avalanche fatalities this week, so - again - please take extra care; heed local advice, stay off closed slopes and enjoy the fantastic conditions now on the pistes!

Yet another bout of significant snowfall is rolling into The Alps over the next few days, but once that clears, some clearer weather looks to follow.

Temperatures next week should start below seasonal averages and ease as the week progresses. Skies will be clearer than this week, and there should be scattered snows in most areas also.

The Alps
Austria
Things are looking ever snowier in Austria, thankfully, with many resorts receiving 20-40cm of snow in the last week and some (Pitztal) as much as 95cm. The really good news is that in the last few days temperatures have dropped right down to the valley floors and resorts finally have snow on the ground – not just upper slopes. It also means snowmaking systems can operate at full pelt. The other good news is that the snowfall is set to continue with 30-60cm more expected by this time next week. The snow has been particularly welcome at lower level resorts in the Tirol like Mayrhofen after almost nothing all season. As has been the case for the past few months, the best conditions – at least in terms of snow depth – remain up high with 2.4m (8 feet) on the Kaunertal glacier. Solden got 40cm of fresh snow this week and has 1.9m on upper runs but still only 10cm down at resort level.

France
French resorts have seen huge snowfalls for the second successive week, with Chamonix claiming up to 3m/10 feet in 7 days as well as a 3m/10 foot base – the first major ski area in Europe to hit that stat this season. The numbers are for its highest slopes however and down in resort, like most French areas, it was raining last weekend and there was little or no snow cover. That has changed in the last few days with the snowline dropping to the valley floor and Cham now says it has 40cm at resort level. Most French areas now have very healthy snow depths of 1-2m on upper runs and up to a metre at resort level, but it's not completely universal; southerly ski areas like Isola 2000 have only 40cm depths and reported only 5cm of snow this week.

Powder alarms have been coming in daily from many resorts, Flaine and Meribel for example both reported 30cm/a foot of fresh each in the 24 hours to Thursday morning. The heavy snow, temperature fluctuations and sometimes strong winds have made the snow unstable and skiers are being strongly advised to stay on pistes that have been made safe and are open, especially in the light of the avalanche tragedy on the closed piste in Les 2 Alpes on Wednesday and earlier avalanche deaths off piste near Val d'Isere.

Italy
The biggest news in Italy is not so much another four feet of snow (120cm) claimed by Cervinia in the West but the fact that the dolomites in the North east have finally received a decent snowfall with Cortina reporting nearly two feet (55cm) of snow in fact. Most other areas in the Dolomites reported at least 20cm – the first real natural snowfall this winter. Much more snow would be good as base depths remain in the 20-40cm bracket for most Italian resorts other than those in the far West where they're much more normal, however only 5-15cm more snow is expected in the country the coming week.

Switzerland
Swiss resorts too have been publishing some incredibly big numbers for 7-day snowfall, including 190cm (over six feet) at Crans Montana, and not quite that much but more than a metre at Saas Fee, Verbier, Murren and Gstaad. Most other resorts have had 60-90cm (Two – three feet). As a result base depths are getting up there – 2.5m at Crans Montana and at Anzere, funny to think that Crans Montana was struggling for snow cover a fortnight ago. The smallest snowfalls (20-30cm) were reported on the far eastern side of the country which needed it most, but are looking much better for the fresh snow, even if it wasn't the deluge in the west. St Moritz, for example, got a foot and its previously thin base is now a more respectable 30-50cm. Swiss snowfall is expected to ease over the next week but still another 20-40cm of snow is forecast.

Scandinavia
Scandinavian ski areas have been having quite a snowy week too and are looking as they should for mid-winter. Snow-depths are generally in the 40-90cm bracket, with snowfalls of up to 37cm (Salen in Sweden) over the past week reported with around 25cm in Hemsedal and Trysil in Norway and a dusting up in Lapland.

Pyrenees
Not much fresh snow reported in the Pyrenees over the past week; the most (around 25cm) on the French side in Cauterets. In Andorra and on the Spanish-side it has been more like 4-8cm. Snow depths remain OK at 30-70cm - though more fresh snow would be nice, and a little is in the forecast.

Eastern Europe
The big snowfalls forecast for Bulgaria week ago have still not quite arrived but if anything the forecasts have got bigger, with up to 80cm now forecast, and much of it expected to fall by the end of the weekend.

Elsewhere the general Easterly movement of the heavy snowfall in the alps has extended into countries like the Czech and Slovak Republics and there's powder conditions there. But some countries like Romania and Slovenia are reported to be still waiting.

Scotland
At last there's fresh snow, low temperatures and fairly stable conditions on the Scottish mountains and all five Highland areas have opened in the past week. Most do have relatively thin cover so far and limited terrain open, with Cairngorm offering the biggest skiable area at present, but snow keeps falling.

North America
Canada
There's been fairly balanced snowfall on East and West coasts of Canada over the past week with each side receiving around 20cm. The West continues to be in great shape with bases mostly in the 1-2m bracket and most getting a 10-30cm top up of fresh cover. In the east the new snow is more needed, Mont St Anne which celebrates 50 years in business this weekend got 22cm to bolster its base now at 22-40cm.

USA
The US too has seen fresh snow in New England in the north east and New Mexico in the South west over the past week with both areas reporting up to a foot of fresh cover. There's been more snow in most other US ski regions too but Sugarbush in Vermont got the most with 35cm, and Alyeska, Alaska, placed second with yet another 30cm. Mammoth in California currently has the deepest reported snowbase at 292cm – a few inches under 10 feet.
The Admin Man
Edited 1 time. Last update at 21-Jan-2016

Has been a week since top lifts in Chamonix opened, I expect to see it updated to 4m on Saturday when weather improves. Big snow again today, this evening.