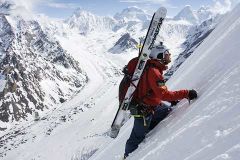 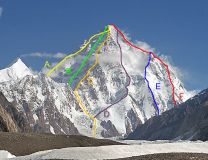 There is a blog update from Islamabad today on the expedition..

Indeed, the last time anyone made it to the top of K2 was in 2008 when 30 climbers from 10 different expeditions joined forces to make a summit bid. Around 18 of them are believed to have made the summit and in a terrible chapter in the history of climbing, 11 of them never returned.

The next year, 2009, the mountain brushed off all her suitors, sparing all but one precious life, that of Michele Fait, an experienced Italian ski mountaineer whose tragic death deeply saddened both the climbing and skiing communities

Picture of the south-face climbing routes... There is another blog update introducing the guides team, with details of a Twitter page for updates.


In the meantime, we'll be in Islamabad, taking advantage of our last two days in civilization to enjoy the simple pleasures of champagne-drenched, cocaine-fueled nights spent in the company of an endless stream of exotic, high-class prostitutes. I'm joking, of course. Anyone who knows anything about Islamabad (or Fredrik and me for that matter) knows that simple pleasures at this point mean little more than a comfy bed, a hot shower, cold Coca-Cola, and ice cream. Man, how we're gonna miss that ice cream.

There is a Blog update by Trey Cook on Outside Online...


8:30 a.m. The pit, in and of itself, was inconclusive. When pressured with the kind of force that would represent a skier executing a silky smooth jump turn, a layer did, in fact, release, but it wasn't the kind of sheer that shrinks your cojones and sends you tiptoeing for the nearest safety zone.

K2 Base Camp, Pakistan – After arriving in Islamabad on 30 May, Fredrik Ericsson and Trey Cook were told of unusually deep snow conditions on the Baltoro glacier. The team changed their plan and decided to approach the peak via the Gondoro-la with an attempt on Laila Peak which would enable them to acclimatize and allow the deep snow to consolidate.

Ericsson and Cook travelled from Islamabad to Hushe via Skardu where the trek into Laila Peak base camp began. As reported the team found the deepest snow in the Gondogoro valley in at least 15 years. The team attempted a ski descent of Laila Peak but were turned back 300 meters from the summit by deep, unstable snow. However, Ericsson did enjoy a 1000 vertical meter descent on Laila's pristine, 45-degree northwest face. Following their attempt to ski Laila Peak, Ericsson and Cook and 18 porters took three days to cross the Gondogoro-la pass, swing through Concordia and arrive at K2 base camp.

The team reports that conditions on K2 are favorable and will be heading up the Cesen Route tomorrow to Camp 1 for an early round of acclimatizion and to scope the route.

Hotels and Apartments in and around Conco 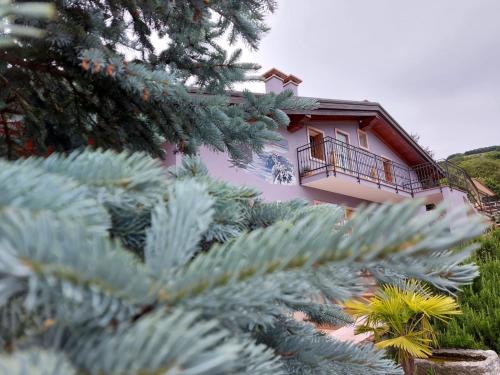 Snow is next forecast to fall in Italy over the next week, in at least 50 Ski Resorts including Cortina d`Ampezzo, Livigno, Madonna di Campiglio, Passo Tonale and Selva Gardena.