Return to The Hof, the Hara Kiri, and Hintertux

Return to The Hof, the Hara Kiri, and Hintertux 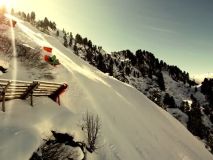 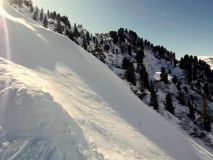 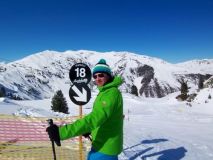 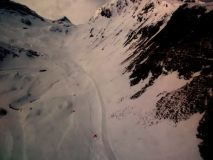 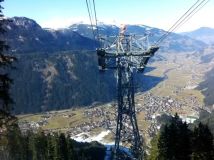 So I'm just back from my 5th visit to Mayrhofen, having not skied there for 4 years. The good part was that I remembered almost every run, where everywhere was in the town, and that it snowed the night we arrived. The bad part was that in the 4 years since I was last there, its got hellishly busy, it doesn't compare to the skiing at other resorts I've been to since, and the snow by the end of the week was just about skiable up the mountain. Temperatures topped 21c on Friday afternoon. However, I was able to ski 2 of my favourite runs in the world again: red 7 from the Horberg, and red 2 off the Ahorn. My confidence and ability has clearly come on in the time since I was last there, as I thought these runs were a lot longer and somewhat more difficult than this time. In addition however, I made my first visit to Hintertux - the glacier up the valley. A mate of mine who was with us has been to Mayrhofen 19 times and never bothered going to the Tux, but as it was getting warmer and we wanted a change of scene, we headed up on the bus. Its only 25 minutes on the free bus, and the snow was far better up there due to higher altitude and colder temps, but looking at pics posted on here a little while ago, conditions have got worse quite quickly. We were lucky enough to have a cold day with some good skiing still to be had. I also spent a bit of time watching some very serious and talented skiers and boarders at the Vans Park down the back of the Penken, enjoying some great tricks and decent air. On day 2, whilst there was still some decent snow to ski on, 3 of us decided (4 out of the group of 8 of us who went were capable of doing it) to give the famous Hara Kiri a go. 4 years ago I did not think I had the ability to do it, but this time I certainly had the confidence to give it a whirl. It has a reputation, and I have seen MANY a good skier and boarder get it wrong and fall a long long way down before stopping in a crumpled heap, only to be carried away on a helicopter. Looking at the slope as you come over it on the chairlift, you can see just why it scares the hell out of people, with a steep and narrow section. But this I felt would be a true test of how far I had developed as a skier. So we headed down, and theres a gentle cruise to get you feeling more relaxed, and then as you come round the right hand corner you reach the lip, the top of the hardest steepest narrowest black run I have seen. At least, it certainly looks like that looking down, and when you find yourself on it. If only there had been more decent snow - any surface snow that had been on it had been pushed away by previous skiers and boarders, and it was simply a layer of a hard and unforgiving packed surface, like sandpaper, very difficult to get an edge at the best of times but even more so at 78 percent or whatever the official gradient is! In typical bravado fashion, I headed down first, put in a couple of turns through the narrow section, and probably untidily made my way down until I hit the softer less steeper section and started to laugh. I looked back and watched my wife and best mate follow me down, somewhat more cautiously than me, but they both made it down with me with no real difficulty. Mrs H's face was one of sheer terror when she pulled up alongside me, and she claimed she could feel her heart beating through her chest!

The Hara Kiri has a reputation, and its easy to see why. I know people who have done it when there has been good snow and found it not too difficult, but I have also witnessed many a good skier/boarder catch an edge or miss a turn and slip for hundreds of metres.

The 4 good skiers in our group had a cracking week buzzing around the area, where we particularly enjoyed Eggalm's slopes once again, and the wonderful long and fast Ahorn Abfahrt - the only run back from the slopes into Mayrhofen.

I won't be going with Crystal again, thats one thing thats for sure, and whilst we had another great weeks skiing from first to last lift as always, I will not be returning to Mayrhofen, as there are plenty of other places out there in this big wide world of ours that need exploring.

For anyone going to Mayrhofen, pray hard for more snow, as I would not want to be skiing it this week, especially during the busy Fasching period on such thin snow coverage. However, enjoy the town and the good selection of cafes, bars and restaurants which I have to say are unparalleled anywhere else I have been skiing. EU2,50 for a beer on average, and my tip for a nice chilled place to drink is Coupe and Moore on the main street about 200m down from the Penkenbahn.

Thanks, Hof, its been good, but its over now.
www  New and improved me

Zell Belle
reply to 'Return to The Hof, the Hara Kiri, and Hintertux' posted Mar-2011

Glad you had a good time and enjoyed reading your report. Good pic of you and your bobble hat

Tony_H
reply to 'Return to The Hof, the Hara Kiri, and Hintertux' posted Mar-2011

I need a new one now. I saw one other person wearing the same one in Mayrhofen. I don't like to conform.
www  New and improved me

Jadavi
reply to 'Return to The Hof, the Hara Kiri, and Hintertux' posted Oct-2013

Thanks Tony this was interesting reqding
- as have booked to go there (for the first time) with partner who was post beginner standard then developed Parkinson's and is giving it another try (still early stages of the condition) and myself steady intermediate. Will there be enough choice for both for a week ? (he only announced he'd try again after we booked an hour ago haha) I might have booked a different more beginner friendly resort if he'd mentioned it earlier!

Is the long run to Mayrhofen a middle red standard?

Gary Waters
reply to 'Return to The Hof, the Hara Kiri, and Hintertux' posted Oct-2013 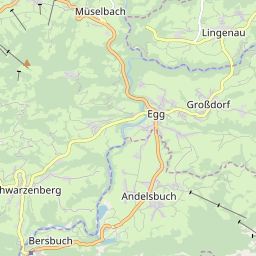