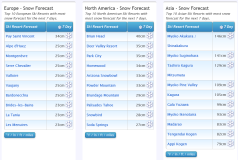 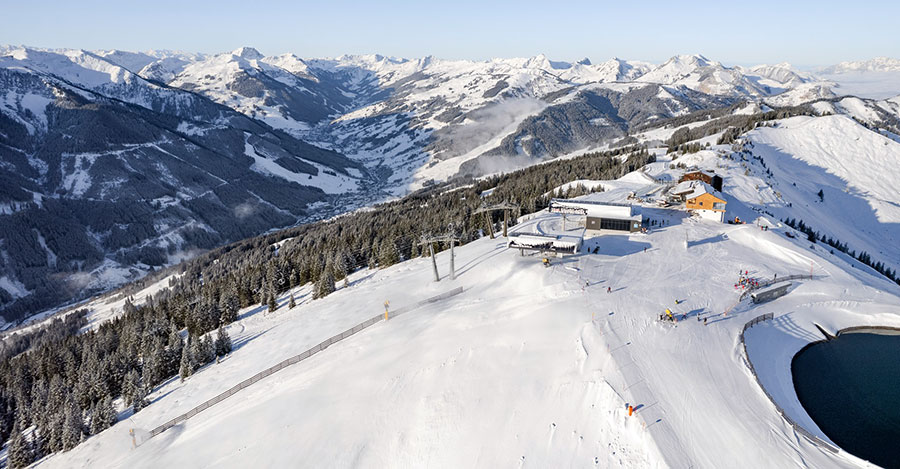 Heavy snow in the US and Japan, cold and snow coming in for Europe.

The Snow Headlines - 8th December
- Austria's largest ski areas including Saalbach and Lech-Zurs open for 22-23 seasons.
- Avalanche warnings in Colorado, California, Idaho and Montana after more heavy snowfall.
- Dolomiti Superski open 400km of slopes including the Sellaronda.
- Japanese ski season is off to a slow start but snow falling. 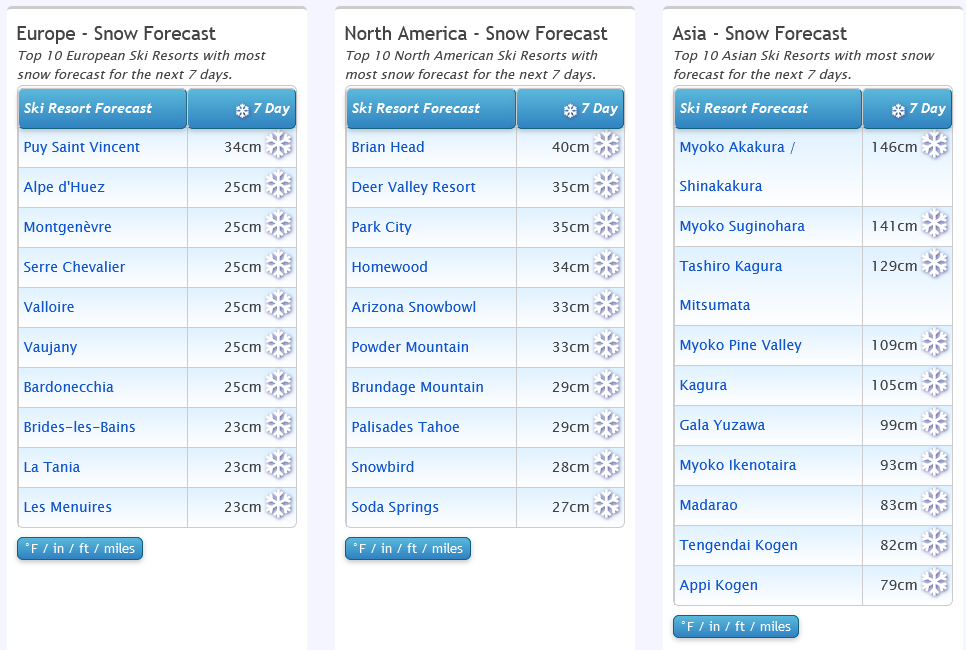 There's snow coming... find out where...

World Overview
The biggest snowfalls of the past week have come, once more, in the Western US, where up to 1.5 metres (60") of fresh snow has been reported and snow depths are up above two metres (7 feet) now at several areas, the deepest in the world at present.

The great snowfalls were accompanied by gale-force winds however and led to high avalanche danger warnings.

In Europe, there's been more fresh snowfall with the Southern Alps and Pyrenees actually seeing some of the best snowfalls of the past week. The Pyrenees also had the resort with the most terrain open in Europe last weekend – with Spain's Baqueira Beret the first to hit 150km of slopes open.

Europe
Austria
Around 50 Austrian ski areas have opened for the season now, still the most of any country in Europe, with that number set to double this coming weekend.

Ischgl / ​Samnaun's Silvretta Arena and Sölden both now have more than 100km of slopes open and some of the country's biggest ski regions around the Arlberg, and Saalbach Hinterglemm, have opened for the season.

Fresh snowfall has also been reported across the country with snow depths on glaciers finally beginning to recover after the long hot summer. Sölden is posting the country's deepest snowpack at 1.7 metres (nearly six feet).

There was snowfall in the southern Alps at the weekend moving progressively north earlier this week meaning most areas got a nice slope refresh.

Italy
Perhaps the biggest news from Italy this week was the opening of the famous Sellaronda circuit which links together half-a-dozen ski valleys to create one of the world's largest linked ski regions with around 500km of slopes. Dolomiti Superski said it had 400km of slopes open this week, about a third of its full area. That's been achieved, as is often the case there, without a huge amount of snow cover, and much of it machine-made.

That said there was fresh snowfall at the weekend and the start of the week as snow-bearing clouds moved north from the Mediterranean so things are now looking more wintery.

Switzerland
Swiss ski areas have seen low temperatures and fresh snowfall this week, improving conditions there. Andermatt and Engelberg were among the resorts reporting great snowfalls on Monday and Tuesday.

More than two dozen Swiss areas are now open and that number will go past the 50 mark from Saturday.

Saas Fee continues to post the deepest snow in the region at more than five feet while Zermatt and Cervinia and Samnaun and Ischgl both now offer more than 100km of open slopes.

Pyrenees
Spain's Baqueira Beret has been posting the most terrain open in Europe for the past week, leaping ahead of Austria's Ischgl to report over 150km of slopes open last weekend, despite having only a 30-40cm base. It managed to stay ahead of Grandvalira, the region's biggest ski area when fully open, in Andorra. It was one of the vast majority of Andorran and Spanish ski areas opening for the season last weekend along with half a dozen French areas.

All have seen some good fresh snowfalls over the past week, keeping snow conditions fresh.

Scotland
After warmer weather at the end of last week, it has turned colder again in Scotland and Thursday saw widespread light snowfall. There's not really any sign of any centres being closer to opening much terrain at this point, but Glencoe is among the areas that have already fired up their all-weather snowmaking systems and is initially using the snow for tobogganing.

Glenshee says they plan to open on the 17th.

Scandinavia
Scandinavia's biggest resorts are opening just as we complete this week's report. Hemsedal in Norway and Scandinavia's largest ski area Are in Sweden are both opening, joining most of the region's other large ski areas which have opened in the past week or so.

Conditions have been mostly wintery, despite a bit of warmer weather at the weekend bringing rain to some more southerly centres for a short time. Mostly though it has been dry with temperatures in the range of -10 to -25C, so much colder and good weather for snowmaking.

Eastern Europe
Eastern Europe's ski season is underway with ski centres opening in the Czech and Slovak Republics, Poland, Romania and other countries in the region. The largest, Jasna, was among those opening last weekend.

There's snow cover down to low elevations in Bulgaria too but no centres are open there yet. Bansko plans to open the week before Christmas.

North America
USA
The start of western America's season continues to be one of the best in years with resorts in California posting over a metre, in some cases, of fresh snowfall over the last seven days.

It's not all just floated down, however; there've been gales, blizzard conditions and high avalanche danger at times but the overall result is great snow cover for this early in the season and plenty of powder skiing when the weather and snowpack have been stable enough.

Steamboat was among the resorts closed on Thursday by yet another storm having reached 100" of snowfall already this season. The conditions are similar across the West of the country with lots of snow in the Rockies and Pacific Northwest regions too. The Palisades in California reports nearly five feet of snowfall in the past 7 days.

Canada
Cold weather across Canada, coldest in the West where temperatures have consistently been double-digits below freezing.

In the East, it remains rather marginal with some centres still seeing rain rather than snow, but Tremblant now reports the snow several feet deep on its higher runs and about 20km of slopes open - about a fifth of its maximum possible.

There's more open in the West which continues to see heavy snowfall and powder snow conditions. There have been gales too though which impacted the Women's World Cup ski racing at the weekend with the start of the race course moved down the mountain as a result.
The Admin Man