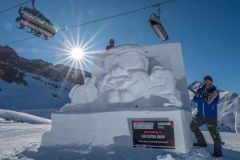 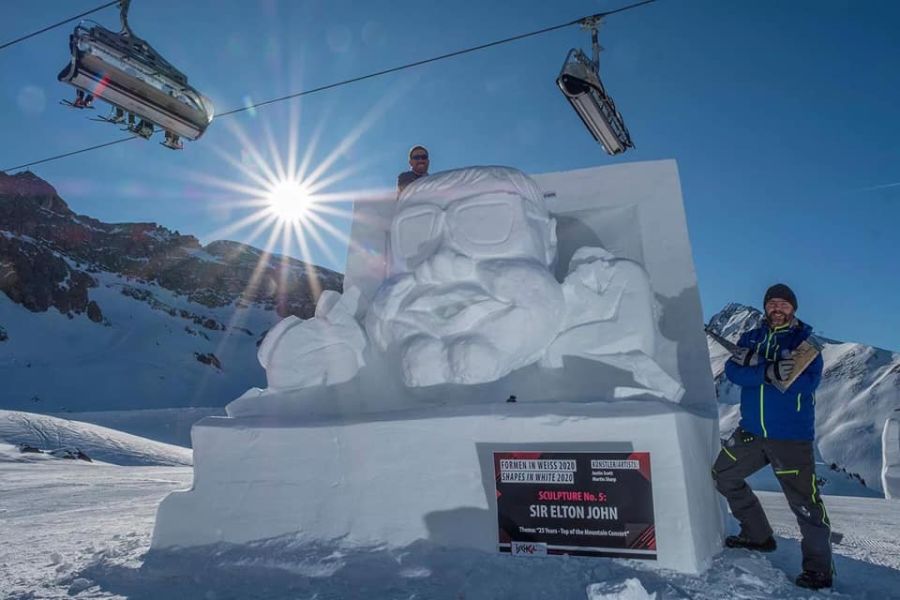 British snow sculptors Justin Scott and Martin Sharp have created a likeness of Sir Elton John on the slopes of Ischgl in the Austrian Tirol.

The two Yorkshiremen are frequent visitors to Ischgl to take part in the resort's annual Shapes in White competition – in fact Justin met his wife Jasmina there – and with this year's theme being 25 years of Top Of The Mountain rock concerts, it was the perfect opportunity to create a homage to Sir Elton John, who has twice performed open air gigs in Ischgl.

It was the second time that tree surgeon and gardener Justin, from Driffield, had modelled Elton in snow – the first was in January 2003.

"We've done the best work we could have possibly done given the timescale. It's a homage to the performance on the mountain, with the stage – and of Elton John, a British artist," said Justin, adding, "One of the elements I do is to make a hollow in the sculpture. I cut it and Martin made the hollow and in the hollow he's made a seat. Around it says Sir Elton John and a star, number 1, and people have been coming in and sitting there and having their photograph taken. Initially when I first came here it was for a snowboarding holiday and as a trained sculptor it's great to come away and do something with the snow. Ischgl means a lot to me."


Ten pairs of sculptors from across Europe competed in the 27th annual Shapes in White, with Italians Ivan Holzknecht and Armin Rifesser from Val Gardena coming top with their creation 'Guitar and Saxophone'.

The sculptures will remain on the slopes to be admired by skiers and boarders until the Spring thaw. 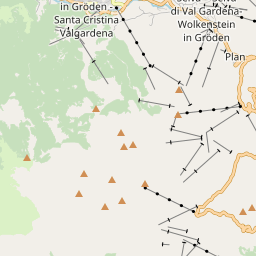