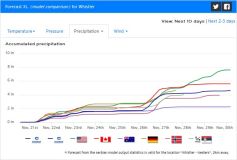 Skiing under a blue sky, Hintertux this week...

Pre-season snow, mixed with autumnal warmth this week, with cold coming into the forecast.

It's been the usual Autumn roller-coaster of weather conditions over the past week with the storms that brought up to two metres of snow to high slopes in the Alps at the start of the month giving way to unseasonably warm temperatures for a while (cooler air is forecast).

The main result of this in the short term is Val Thorens deciding to cancel its planned pre-season weekend this Friday.

Across the Atlantic, resorts are continuing to open early for the season with some Colorado resorts already claiming this is the best start to the season there in a decade. Canada's 2018-19 season also got underway at the weekend with four ski areas in Alberta opening.

A distinct turn to cold, with the possibility of significant snowfall in the last week of November, is now on the cards for the Alps; with the current high pressure system expected to move North to allow much colder air to push in from the East.

We'll have more detail on that next week; it looks promising, but too far out to be sure at the moment.

See where it's expected to snow this week... (and, yes, that's Greece looking to get some snow!)

The number of ski areas open in Austria has finally reached double figures with Obergurgl opening for its 18-19 season today (Thursday 15th November). It joins the country's eight glacier areas, most of which have already clocked up six weeks or more of the season, and Kitzbuhel, still operating with snow saved (or 'farmed') from last season.

Obergurgl has 15km of runs open served by about 10 lifts, but several of the glaciers, particularly Hintertux and Solden, have around 20-25km open, so still rather more available high up.

France
Val Thorens reports temperatures too warm and conditions a bit windy so has taken the decision to cancel a planned pre-opening weekend this coming weekend and focus on its main season opening a week on Friday. It reports the snow great above 2700m but a gap between that level and the resort itself.

Chamonix also planned to open this weekend and so far hasn't said it won't be doing so it looks like it and already-open Tignes will be the two choices there this Saturday. A third possibility, Porté Puymorens, opened last weekend in the French Pyrenees, but it is looking less certain it will again this weekend.

Italy
There's little change in Italy either with Solda/Sulden and Val Senales/Schnalstal open plus Cervinia accessing the ski area it shares with neighbouring Zermatt. There's been no fresh snow reported here either but conditions are good in the sunshine. Livigno is set to join the club imminently and reports its slopes in excellent condition.

Switzerland
With the unexpected opening of Verbier at the weekend there are six centres currently operating (although some, including Verbier, currently only at weekends).

Year-round Zermatt and 9-months-a-year Saas Fee have the most terrain open, each with around 25km of runs, but there's also some skiing open on the Diavolezza glacier near St Moritz, on the Titlis glacier at Engelberg and at Glacier 3000 between Les Diablerets and Gstaad. Sunny here too.

Scandinavia
It's been a bit too warm for many new areas to open in Scandinavia this past week either and the tally remains at about half-a-dozen with Narvik and Kvitfjel in Norway, Idre Fjall in Sweden and Levi and Ruka in Finland all open for the season.

Ruka is in to its second month already in fact and Levi is gearing up to host the first races in the FIS Slalom World Cup tour this weekend (with Dave Ryding in action for TeamGB).

Pyrenees
After the snowy start to November which saw Porté Puymorens in the French Pyrenees become the first non-glacier resort to open, and Masella on the Spanish side post its earliest ever opening in its 60 year history, things have warmed up a lot in the Pyrenees. The early cover has largely thawed and it's unclear how much longer these two areas will be able to keep operating before the next snows arrive.

Scotland
Warm weather in the UK has melted most of the early mountain snow cover from Scottish hills and it looks to be staying warm for at least the next week. Three of the five highland ski areas now have all weather snow-making systems in place however so a late November/early December opening of at least some terrain looks likely, whatever the weather.

Eastern Europe
There's been some snowfall reported on high slopes in Romania and elsewhere on the eastern side of Europe but so far no reports of any areas planning to open before December.

North America
Canada
Canada's ski season got underway last Friday with the three Banff resorts of Sunshine, Norquay and Lake Louise all opening, as did 'Calgary's closest resort' Nakiska. A fifth Alberta area, Marmot Basin near Jasper, is scheduled to join them this weekend. Cover is so far rather limited but the fact that Sunshine, one of the few major ski areas in the world still operating without snow-making could open is clearly a good sign.

On the East coast there's been up to 40cm of snow reported in Quebec and several areas are opening this weekend including Mont Saint-Sauveur.

USA
The US continues to enjoy a good start to the season in most areas. More resorts have been opening in Colorado and New England but resorts in the Midwest in states like Wisconsin and Minnesota are also now opening as well as areas in Montana and on the southern side, New Mexico, where they've also had good early snowfalls and snow-making conditions.

Vail has opened early (on Wednesday 14th) after 1.2m of snowfall in the past month there, and we've just heard that Aspen Mountain will open this Saturday (17th November) and Snowmass will open next Thursday (22nd November).
The Admin Man
Edited 1 time. Last update at 15-Nov-2018

How do I change resorts snow reports


Hi Dave - if you scroll up the page, you'll see a blue bar with a button that says Daveall Profile on it; click that and you'll see the options.
The Admin Man

Does anyone know exactly where this website gets their forecast information from? As in what source? Reason I ask is that it is slightly different than the more common accuweather and weathernetwork forecasts, so how do I know which one would be more accurate?

morrisk9 wrote:Does anyone know exactly where this website gets their forecast information from? As in what source?


We use GFS (Global Forecast System) data, localised for us by a 3rd party who apply topographical effects, from which we produce our info.


morrisk9 wrote:Reason I ask is that it is slightly different than the more common accuweather and weathernetwork


There are a handful of major models (e.g. GFS, ECM, GEM, ICON, UK Met Office, etc.) that drive the vast majority of weather forecasts you can find. Each one updates multiple times a day, and different services take different approaches to how they process, summarise and display the data - so you'll see slight differences even when the same original model was used.


morrisk9 wrote:how do I know which one would be more accurate?


You can't (assuming you don't own a time machine, of course).

If any one model stood out as being significantly more reliable than the others, then everyone would use it. That's just not the case with today's technology.

The first key thing to always remember is that a forecast isn't telling you what WILL happen; it's just showing you what the latest run of the forecast model indicates is the most likely outcome of many possibilities.

The second thing is that the forecast will change, sometimes substantially, from one run to the next - several times a day.

The shorter the timescale, the more those possibilities converge and the more "accurate" the forecast becomes.


Similar questions come up regularly, and it's definitely worthwhile taking the time to explore how the forecast models work... you can see some of the complexity (and switch between different model outputs) at the excellent Ventusky


Beware of charlatans :- there are weather sites that claim to have "accurate long-range forecasts". They're lying!
The Admin Man

OK, but there seems to be a conflict here. First you stated you use only the GFS model. Then you stated, "If any one model stood out as being significantly more reliable than the others, then everyone would use it. That's just not the case with today's technology". So why don't you use a forecast that is a blend of at least a few models? That's what the US National Hurricane Center does...they obtain an "ensemble" of several models and blend them together for one forecast.

The reason I ask is that your site is currently predicting between 68-80 inches of snowfall for Whistler-Blackcomb over the next 14 days. That is a lot, even for their standards. But no other forecast site (weather.com, weather-network, Accuweather, and even Whistler's own website) show anywhere near the totals your website is forecasting. Even over just the next 5 days, your totals are significantly higher than any of these other website's totals - including Whistler.com.

So I just don't know how your forecasts can be relied upon for any reasonable accuracy. I understand that each day the forecast increases, the accuracy will decrease accordingly. But your forecast is much much more extreme than any other forecast I have seen...so I just don't see how one can take it seriously.
Edited 2 times. Last update at 20-Nov-2018

morrisk9 wrote:So why don't you use a forecast that is a blend of at least a few models? That's what the US National Hurricane Center does


Well it's just a guess but I suspect the National Hurricane Center has a little more processing power and budget than we do!

And while it makes sense to "blend" multiple models to predict all possible paths for a hurricane it really makes no sense to average multiple forecasts for a single location.

Don't shoot the messenger; here's Ventusky's visualization of the GFS-forecast precipitation out to Monday

You can switch to GEM, which has a similar outlook albeit with a little less precipitation (those are "rain" figures on the animation so roughly x10 for snow).

This is a comparison of the outputs from several forecasting models for accumulated precipitation at Whistler over the next 10 days. 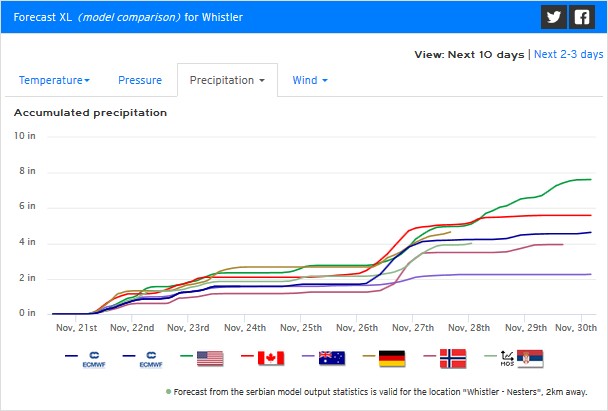 As you can see GFS is predicting more than the others, it pretty much tallies with the others until the 28th but then for some reason it takes off. However, as all the models are predicting that there will be some precipitation its likely that there will be some snowfall up on the mountain, but as temperatures are forecast to remain above freezing it will likely rain in the town.

Even a very well-resourced organisation like the Swiss Institute for Snow and Avalanche Research that can call on the resources of MeteoSwiss, the Federal Office of Meteorology and Climatology which has developed its own high-resolution forecasting model for the Alpine region https://www.meteoswiss.admin.ch/home/measurement-and-forecasting-systems/warning-and-forecasting-systems/cosmo-forecasting-system/cosmo-1-high-resolution-forecasts-for-the-alpine-region.html?query=Cosmos only issues snow forecasts for 2 days https://www.slf.ch/en/avalanche-bulletin-and-snow-situation.html#avalanchedanger forecasts for longer periods usually have a probability of below 50% i.e. they are a guess.