Funiflaine lift from valley floor to Flaine gets green light

The long awaited 'Funiflaine' lift, which will connect the valley with Flaine and the Grand Massif ski area, has been given the green light.

Earlier this month, a formal contract organised by the Department of Haute-Savoie and the communes of Arâches-la-Frasse, Magland and Cluses Arve was drawn up detailing plans.

The aim is to ensure that by 2025, the Funiflaine will link Magland (halfway between Cluses and Sallanches) to Flaine.

The POMA 2S cable car will have 68 cabins, but just six pylons to reduce the literal footprint as much as possible. It will take only 19 minutes to climb the 1360m from Magland to Flaine, with an uplift capacity of 5000 skiers per hour.

A new railway station and parking in Magland are both in the planning stages and it's anticipated that train will be a key method of transport to the resort. It's estimated that it will reduce the number of vehicles driving up the mountain by 500,000 per annum, saving 10 tonnes of CO2.

The construction and running of the new €89 million lift will be a joint operation between the Compagnie des Alpes, ATMB (who manage the autoroute), POMA and Crédit Agricole des Savoie.

Wow that's one impressive looking lift! Can't think of one with a 5,000 people per hour uplift before? I may be forgetting somewhere though... Price tag must be one of the highest ever too, can only think of the one on the Italian side of Mont Blanc coming in at over €100m and that had revolving cabins, multiple stations and some pretty extreme-environment construction requirements up at the top.
www  The Snow Hunter

€89 million is much more than a 2S lift of this size would normally cost. Leitner has just built a similar 2 section 2S lift to replace the old Nebelhorn cable car at Oberstdorf for €55 million, this will likely have also included the cost of removing the old lift https://www.ok-bergbahnen.com/unternehmen/baumassnahmen/neubau-nebelhornbahn.html

If you look under "Présentation du projet" https://www.funiflaine.fr/le-syndicat-mixte/ it states that the project comprises:

A 5.3 km long aerial ropeway with a target capacity of 2025 persons / hour / direction.

A logistics facility that will organise the transit of goods, merchandise, luggage, etc.

Before the project can go ahead environmental impact studies must be carried out and a declaration of public utility obtained https://en.wikipedia.org/wiki/D%C3%A9claration_d%27utilit%C3%A9_publique If all goes well construction is scheduled to start in 2023 and the lift should go into service in December 2025.

Both Leitner and POMA are part of the HIT Group https://www.poma.net/en/hti-group/ so the lift will most likely be a POMA branded Leitner 2S lift https://www.leitner.com/en/products/ropeway-systems/advantages-2s-system/ The 2S system (the S stands for Seil, the German word for rope) isn't as popular as it once was as in most cases a 1S gondola lift will do the job just as well, but the use of a carrying rope results in a reduction in the number of pylons required, which is advantageous in environmentally sensitive locations.

Whilst the journey time reduction will certainly be welcomed by skiers arriving by train and by people who live in the valley and work in Flaine I think might be difficult to get holiday skiers who would normally drive up to use it, unless road access is restricted or the price of resort parking is greatly increased.

All good info as always, thanks Swingbeep. Presumably the greater part of the €89 million will therefore be going on the three stations and the transport hub? A lot of parking space needed at the base if they do hope people will use it for holidays. I think you're right there'd need to be a cost incentive and/or they'd need to show an advantage of using it to driving (I read there's often slow queues up at weekends so if skiers avoided that??)
www  The Snow Hunter

I think it's reasonable to assume that most of the money will be spent on the lift including its stations and the transport hub, but we won't know for sure until the end of the planning process in 2022.

The goals seem to be pretty modest to me. They claim it will reduce road traffic by 85,000 cars, 500 trucks and 100 buses p.a. I think if they were really serious they would have chosen a 3S lift.

At the moment they are plugging the time advantage, they estimate the time saved on a return trip from Magland to Flaine at between 40 min and 1h30 depending on the time of year and the condition of the road. You could easily loose that amount of time faffing about with luggage and queuing for the lift, especially if the weather's bad and lots of people decide to take the lift.

One thing that I haven't seen mentioned is how are skiers going transport their luggage from the top station to their accommodation? Pushing a baggage trolley through snow is no fun!

Luxury Hotels and Apartments in Flaine 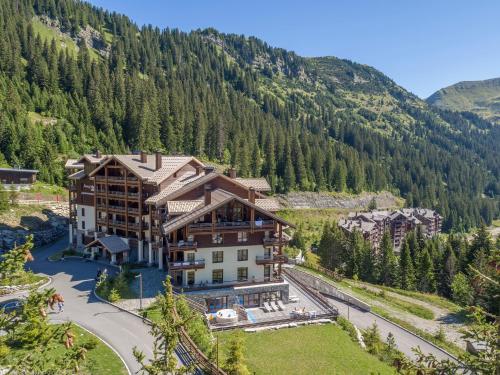 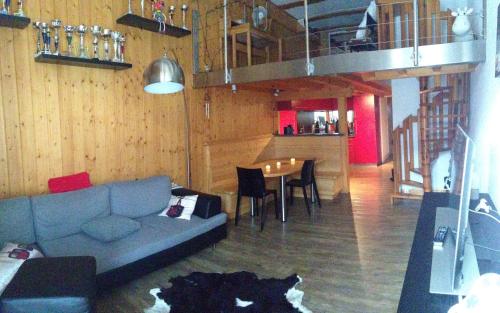