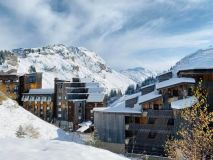 Avoriaz has announced a 'partial opening' this weekend, two weeks ahead of the official opening date.
The move comes thanks to what the resort describes as, "the good snow conditions, with 40 cm of snow in the station and 70 cm at the top of the area."

Located above 1,800 metres, Avoriaz is one of the beneficiaries of the heavy snowfall in the Alps through November, which has provided great bases on higher slopes, although there's much less snow below 1500 metres so far.

The resort says it will open four lifts to serve eight runs, most of them graded blue, and that lift ticket prices are reduced to 21 euros per day or 40 euros for the weekend. Passes can be bought online from today at www.skipass-avoriaz.com

Avoriaz will close during the week but will reopen for the weekend of 7 and 8 December with the same lift pass rates. An update on which lifts and runs will be open then will be given nearer the time.

A number of French resorts in the Alps and Pyrenees are already open although some only at weekends. They include Alpe d'Huez, Cauterets, Chamonix, Montgenevre and Val Thorens.

The forecast is for 30-60cm more snow in the region over the next 72 hours.

French resorts which were already planning to open this weekend include Isola 2000, Les 2 Alpes, La Rosiere and Val d'Isere.