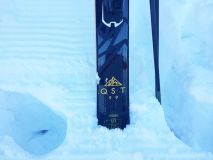 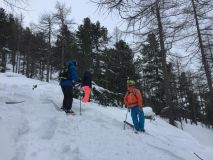 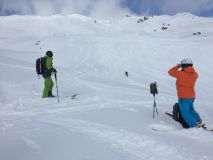 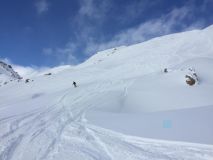 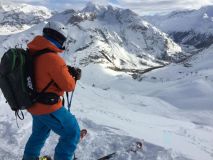 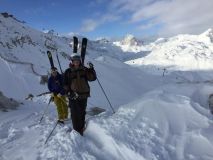 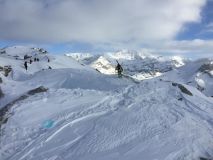 Once more, we kicked off with a discussion of the Avalanche information and noted that the general Risk Level had now dropped to Level 2 at lower altitudes and Level 3 locally and higher.

On each of the previous 2 days, at some point, we'd observed the bowls that stretch out below the Toviere ridge - clearly viewed from the chair up from La Daille (Tommeuses?). Sensibly, pretty much nobody had gone near them on the Tuesday, with a few more tracks appearing on the Wednesday but - crucially - virtually no sign of avalanche activity.

So, with two days of settling now between us and Monday's storm, it was time to climb (a little)... 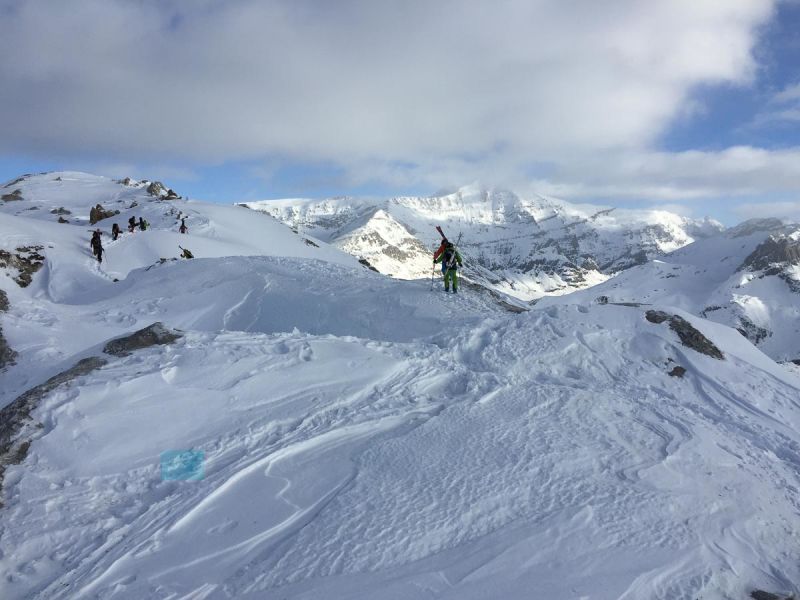 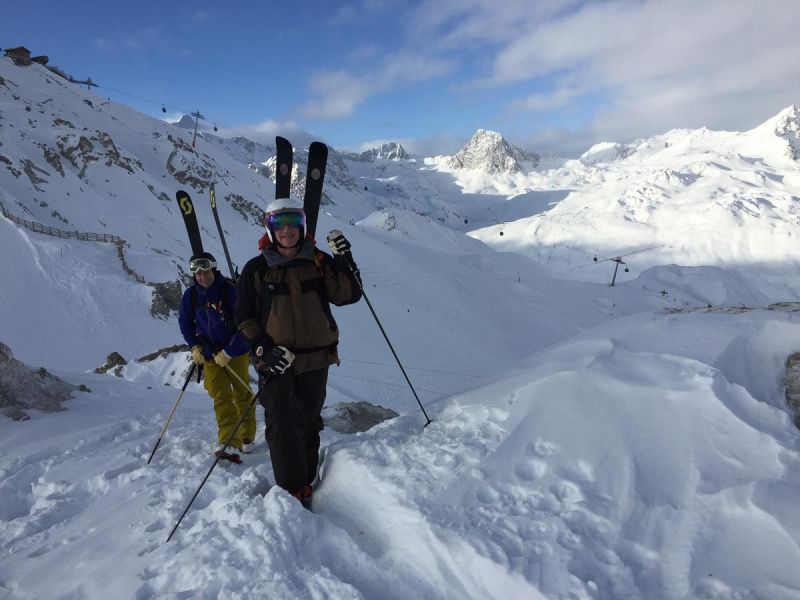 After booting up a short steep section, five minutes walk took us to a choice of bowls. We were able to observe, a little further along the ridge, another group drop in and - in text-book best practice - run one-by-one down their chosen section to collect at a clear "island of safety" lower in the bowl, before moving on. 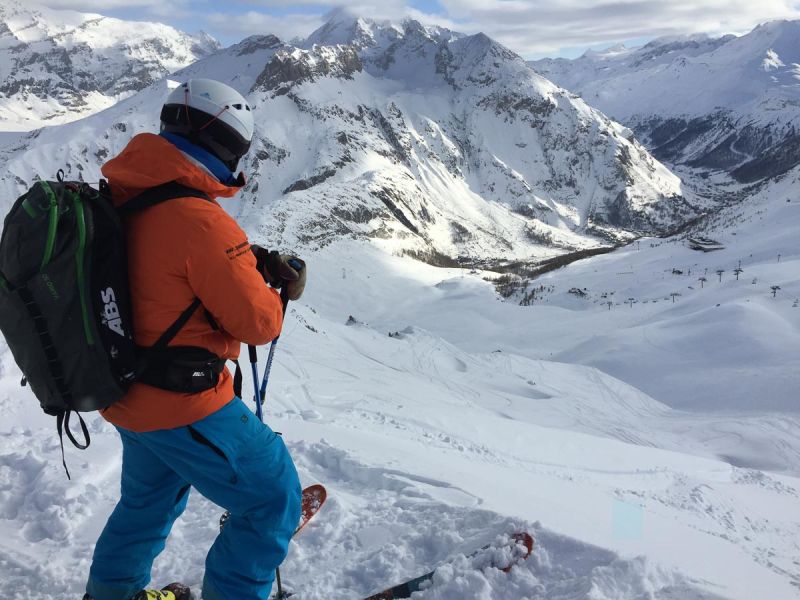 After more discussion of the snow pack, and terrain, Nick dropped in first and rode down to our next collection point, and we followed in-turn into un-tracked, stable powder... 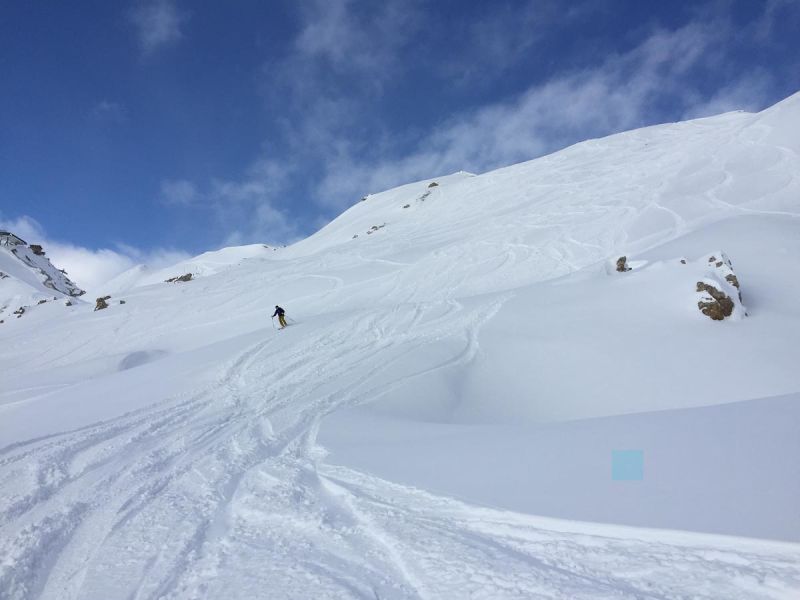 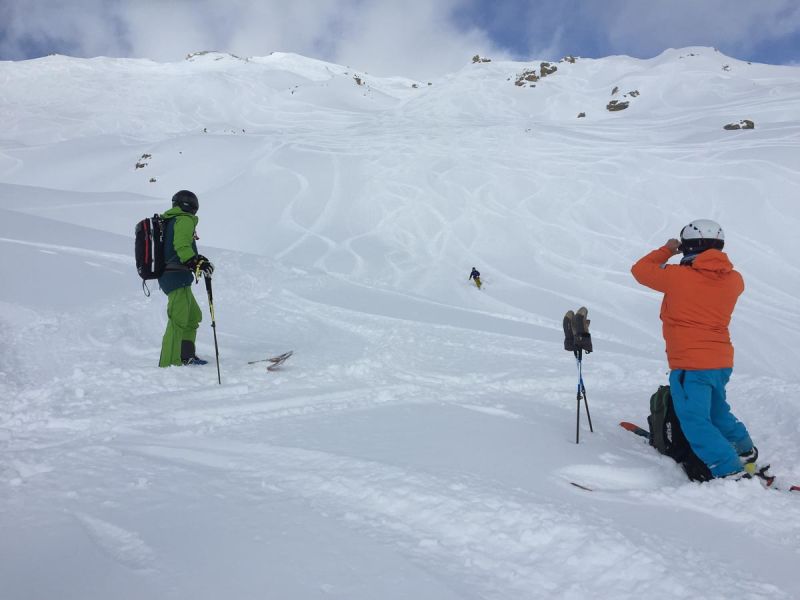 ...and there was much more where that came from!

This morning was particularly satisfying as it was the culmination of careful choice not just of route but also of timing, waiting for the snows from the storm earlier in the week to stabilize. After 3 days, we were still making first tracks.

We kicked off this afternoon with a trip to the farthest (from Tignes) point of Val d'Isere to run through the mellow off-piste known as the Pays Desert, punctuated by a brief stop to "listen to the silence". Some "short turn" and speed control exercises followed when back on the piste as we made our way down.

By now (Day 4 of the course), confidence was growing in the group and Lee led us to a break in the cliffs above the Foret itinerary (I think!) and got our attention by telling us to stay "switched on" for a short but exposed traverse, as there was a brief "no fall" section... followed by a short steep into the forest. 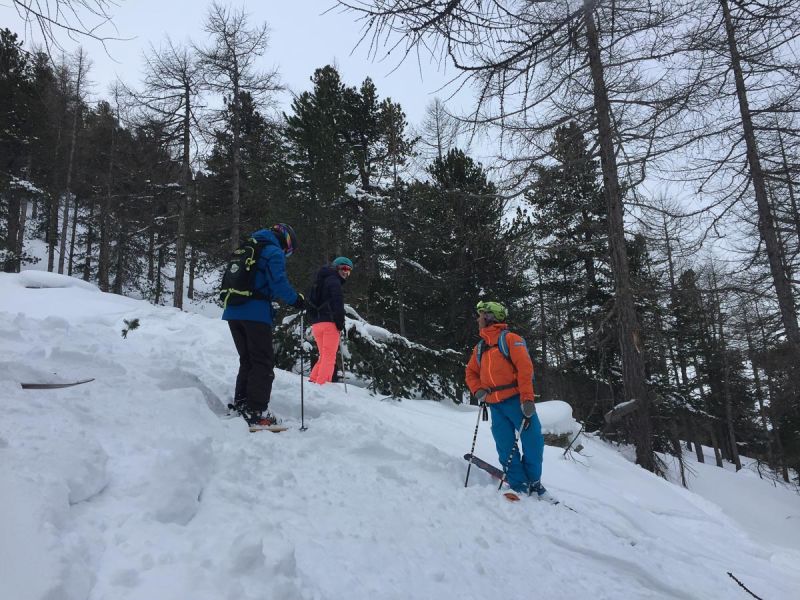 This section of the forest was less dense than the route I'd taken the day before and much more enjoyable; with masses of powder and fairly mellow slopes on which to pick our way down through the trees to Le Fornet once again.

Everything had come together again to make a brilliant day; the wide open powder fields we'd been waiting for, some mellow terrain away from all signs of anyone and some properly powdery tree skiing. Sweet!
The Admin Man

Does look pretty nice snow and seems pretty well covered up from photos. Out of interest and in given Santa has not flown yet what skis was everyone on?

Ranchero_1979 wrote:what skis was everyone on?


Most people, including myself, were on Snoworks' "standard issue" hire ski; Salomon QST99.

I couldn't fault the ski in the conditions last week. Just a little bit scratchy when skidding short turns on bumpy hard-pack, which you'd expect from the width, but great fun everywhere else. Fab in powder and the occasionally variable surfaces we were finding later in the week, and will carve fast and smooth on piste as well.

If I was buying an all-mountain ski they'd definitely be on the shortlist. 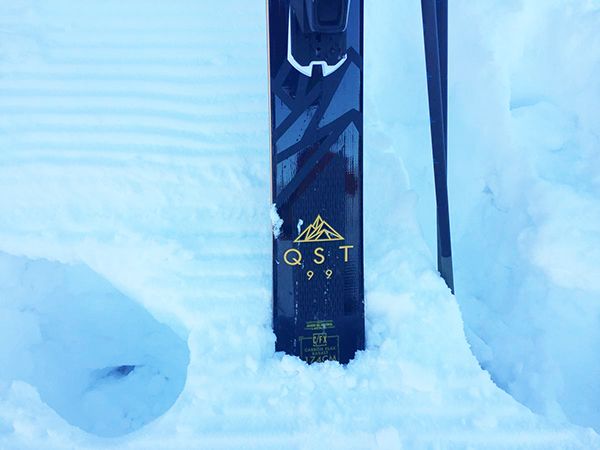 Has been a while but loved my Salomon Shogun which I think were 99 mm under foot. Very flattering ski and surprisingly good on-piste as well. The male-female version only have different cosmetics which I think was their secret success factor for a not to heavy or aggressive skier like myself. With their new touring binding could be contender moving
forward.

At least 13 Ski Resorts in France are reported to be open.