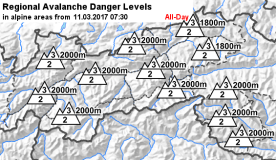 A very predictable, and predicted, result of the huge amounts of snow that has fallen in parts of The Alps this week - combined with varying temperatures - is a very high avalanche risk.

Slightly paradoxically, the few days of warm weather will help to consolidate the snow pack in the medium term but it does mean that the risk remains high for the next few days.

Overall Avalanche Risk Levels are at 3 (Considerable) across a very wide area of Alpine region and it's worth paying attention to the detail in today's Avalanche bulletin from the Tyrol :-


The avalanche situation in Tirol remains treacherous, danger is considerable (upper level 3) widespread above 2000m. The main peril lies in the fresh, small-sized snowdrifts. They are prone to triggering and can release an avalanche even by minimum additional loading. Avalanche prone locations are found on steep, shady slopes and in ridgeline terrain in all aspects. If avalanches fracture down to the old snowpack, they can grow to dangerously large size. The risk of avalanches triggering naturally has diminished somewhat. In addition, the snowpack has stabilised somewhat from the lower temperatures and the nocturnal outgoing radiation. However, a great many avalanches have already been triggered. Starting in late morning the loss of snowpack firmness through daytime warming and solar radiation requires caution. On sun-drenched slopes, loose-snow, in isolated cases also slab avalanches, can then trigger naturally.

Even though the above is for the Tyrol, it also applies to many other parts of The Alps and you should absolutely check local advice before leaving the piste this weekend.

The full bulletin can be found here :- https://lawine.tirol.gv.at/en/home/bulletin/

Enjoy the snow, but stay safe!
The Admin Man

At least 15 French Ski Areas are reported to be open. 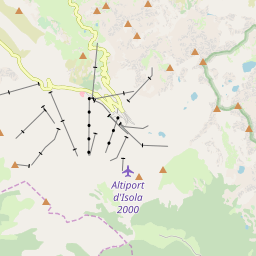