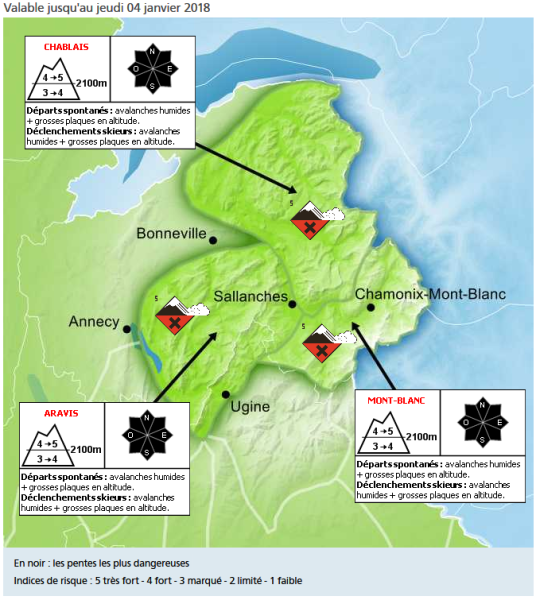 [Latest Avalanche Bulletin from Meteo France - note that ALL slope orientations are marked as particularly dangerous!]


Here's the latest summary from Henry Schniewind from Henry's Avalanche Talk, issued on Thursday January 4th; currently extreme but note the long-term stabilising affect of the rain in the mix...


HAT update: Wild, windy, unsettled weather with more snow for the week ahead
The 2017-18 winter season continues to produce significant snowfall with a series of weather fronts hitting the Alps and especially the north western regions. This is great news for skiers and snowboarders who are experiencing some of the best early season conditions in years – for those looking to explore off-piste terrain, the situation is complex and changing by the day and even by the hour.

The avalanche danger this week will be directly related to a) the overall total accumulations of snow b) the large amounts of snow added by the wind, and c) the rise and fall of the rain/snow limit altitude.

Windslab and snow accumulations are forming, particularly on leeward facing slopes away from the prevailing winds above 2500m. Heavy snowfall expected on Wednesday evening, accompanied by extremely strong winds, will lead to a very unstable situation on Thursday 4th January with an avalanche danger rating of a 5 above 2500m in most of the Northern French Alps.

We will be getting lots of naturally occurring wet snow avalanches each time the rain/snow limit rises and we will see a lot more of this over the next few days into the weekend.

The net effect of all this rain and higher than normal temperatures will be a very good bonding and stabilising of the snowpack in these altitudes where the snow is/has been 'humidified' once the temperatures go down to seasonal norms.

Not only will the avalanche danger rating be 'Extreme 5' to 'High 4' over the next few days, but off-piste snow conditions will also be lethal. With temperatures above seasonal norms, accompanied by rain below altitudes of 2200/1800m, the snowpack at these lower altitudes has become very heavy, deeply humid and difficult to ski. If it refreezes overnight, there is a nasty crust to contend with first thing in the morning. At altitudes between around 2000 to 2500m, mainly just the superficial layers of the snowpack have been humidified and heavy. Any fresh snow expected at higher altitudes will be extremely wind-affected.

Henry's avalanche talks is about helping people to have fun off-piste and is really passionate about enjoying the mountains. Henry said: "It has been a great season so far but this changeable weather is creating a complicated environment off-piste, although the longer term result should be positive as the snowpack consolidates. Right now, extreme caution is advised".